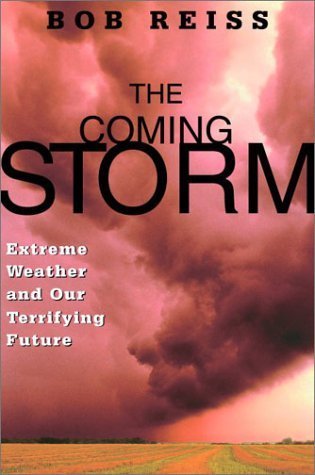 The Coming Storm
Extreme Weather and our Terrifying Future

“What Bob Reiss did to elevate our awareness of the destruction of the rainforest in The Road To Extrema, he has now done for global warming in The Coming Storm. Reiss bypasses political rhetoric and engages us in storytelling, showing us how the greenhouse effect is changing our lives, person by person, commmunity by community, nation by nation”

--Terry Tempest Williams, author of Refuge and Leap.
"From massive waves in the Maldives to tornadoes over Tennessee, from the halls of Congress to the hard disks of scientists, Bob Reiss has taken climate change and made it personal. The Coming Storm is the layman’s guide to global warming - fair, urgent and deeply unsettling.”
--Ted Conover, winner of the National Book Critic’s Circle Award for Newjack
“For too long, global warming has been an abstraction, a baffling blue of techno-speak. The Coming Storm makes the problem concrete by recounting the human drama behind the headlines. No one who reads a this book will doubt that global warming is happening or that the time to act is now.”
--Mark Hertsgaard, journalist and author of Earth Odyssey: Around The World in Search of
Our Environmental Future
“With a storyteller’s gifts, Bob Reiss shows how a series of freskish and colossally destructive weather events awakened scientists, politicians and ordinary people to the momentous stakes of a changing climate…a compelling narrative of the people and events that have shaped this ever more urgent debate.”
--Eugene Linden, author of The Futurte In Plain Sight and The Parrot’s Lament